What is traditional Spanish breakfast? 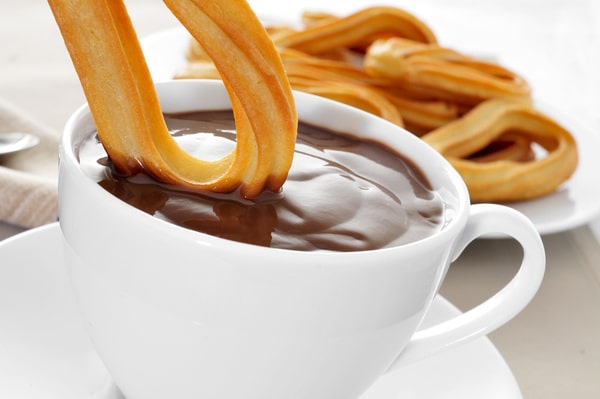 Did you know that in Spain, breakfast, or el desayuno, is the tiniest meal of the day?

Most Spaniards forego breakfast and instead begin their day with a hot cup of coffee or Spanish hot chocolate for children. They’ll frequently get a fresh baked pastry to go with their breakfast drink, which is rarely larger than a croissant.

Churros are a famous Spanish dessert all over the world, but in Spain, the most typical time to consume them is for breakfast, especially during the winter. It’s a terrific way to warm up by mixing it with a cup of hot chocolate.

Porras are similar to churros, but they are larger and have a somewhat distinct flavor. When ordering a plate of churros in Spain, make sure you request one with a porra.

Both churros and porras need to be fried in a good extra virgin olive oil from Spain as it maintains the frying temperature at 180°C (350°F). Moreover, frying churros in olive oilis better for the health since it eliminates free radicals and toxic aldehydes when heated and reused.

A simple and tasty recipe for Pan with Tomate, a traditional Spanish tapa for breakfast that is excellent to start the day!

Crispy toasted bread serves as a great foundation for a lush, juicy tomato that has been grated into a light, fresh topping. This dish is so much more than the sum of its parts, starting with extra virgin olive oil from Spain and salt. It’s not only delicious, but it’s also simple to prepare.

The key to the best tasting of “pan con tomate”, as with many simple meals, is to use high-quality components, such as extra virgin olive oil that is the key ingredient to the toast as a foundation for giving bread a taste. Fresh tomatoes are also required to make this toast taste authentic.

The most important ingredient in this cake is extra virgin olive oil from Spain as it makes the cake soft and helps to stay fresh longer.

What is your ideal breakfast menu in Spain?

That’s all there is to know about the best breakfast meals in Spain. We’ve shown you some of Spain’s most famous traditional breakfasts, but there are plenty more. What would you choose if you were in charge of creating your own Spanish breakfast menu?