Must try food in Madrid you can’t miss 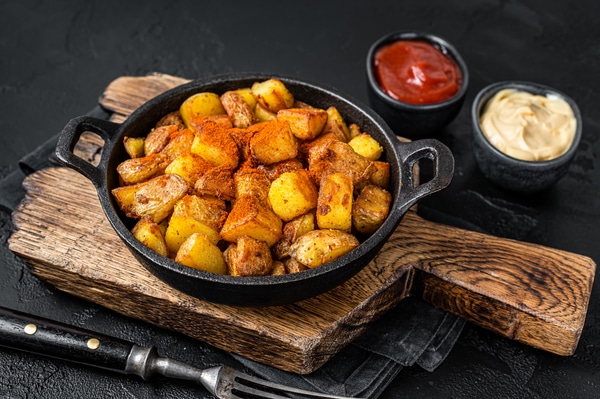 Madrid is a foodie’s paradise, with an unpretentious cuisine scene full of rich, delicious dishes. Mealtimes are never skipped by Madrileños since they like eating a lot. Madrid’s cuisine is authentic and traditional, with simple dishes that have grown from a cuisine oriented on total usage and, above all, meat. There are quite a few iconic places where you can try the typical dishes from Madrid. Here are some of them:

Potatoes with a spicy sauce are known as patatas bravas. Its name is derived from the spiciness of cayenne pepper, which is used in the sauce. Potatoes can be fried, boiled in water, sautéed in olive oil from Spain, and even baked in some places.

Patatas bravas is a characteristic dish of Spanish cuisine. It’s commonly served as a tapa with a glass of Spanish wine to balance off the traditional spiciness of patatas bravas. In Madrid, you can try this authentic dish in a bar “Las Bravas”, where the Bravas sauce was created in 1950.

One of Madrid’s most traditional dishes is cocido madrileño. This is a very classic and delicious stew that is served both in the summer and the winter. It’s made with a lot of meat (veal, chicken, bacon, chorizo, etc.) and vegetables, such as potato, carrots, and cabbage. Of course, it is finished with the spices and herbs, such as paprika and olive oil from Spain.

Fresh squid, flour, salt, extra virgin olive oil from Spain in a piece of bread. Calamari sandwich recipe is a Madrid gastronomy classic that takes mayonnaise, olives, and a glass of Spanish wine as perfect combination. When visiting the capital, tourists from all over the world have «to eat a calamari sandwich» on their list of things to do.

You can enjoy this dish in the most historical place in the center of Madrid – The San Miguel Market. Located in the heart of traditional Madrid, it is in the area with the most personality of the city and the best commercial and cultural combination. Originally, it was a market where the meat, fish and other delicacies were being sold. Today the stalls have been converted into bars and lounge areas with high tables. The interior light is natural thanks to the iron and glass architecture, and in the summer, it has a cooling system that makes the stay quite pleasant.

This sweet delicacy is very popular throughout the rest of Spain and in Latin America. It is thought to have gained popularity in the 19th century in Spain’s capital due to its low cost and availability. Although you can prepare and fry the churros at home, eating churros with hot chocolate is almost more of a social act nowadays. Going to a chocolatería, or churrería, with friends or family is the usual practice. The original place for churros is considered Chocolatería San Gines that was founded in 1890 that makes it the oldest chocolatería in Madrid.