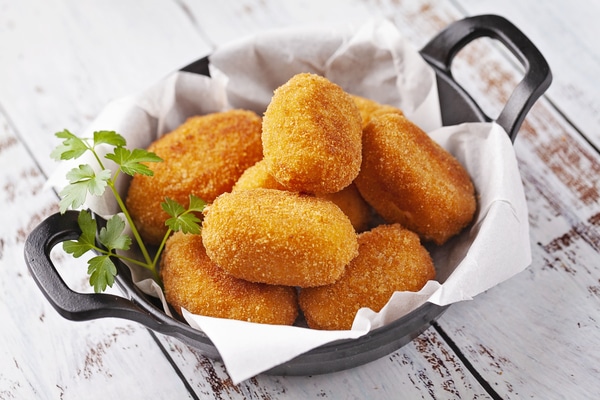 Spain is well-known for its cuisine, a variety of small dishes and sharing them with friends. The appetizer is a treasured custom among the Spaniards to spend a day: having some tapas before lunch, gathering with friends and family, and sometimes, without realizing it, going on till supper time. That’s what it’s like to live in a perfect circle. Going from bar to bar, trying the specialties of each place in small quantities, and another wine to go with it.

Here we invite you on a tour through the typical Spanish snacks that you will not be able to resist. Although in each region the tradition is different, there are a series of dishes that you have to order if you like tapas in Spain:

No, the Russian salad was not invented by a Spaniard. Lucien Olivier popularized this meal in Europe in the nineteenth century. Lucien Olivier popularized this dish in Europe in the 19th century, serving it at his Moscow restaurant Hermitage. Although it is not a native recipe, it has grown extremely popular in Spain, and no bar can be found without an “ensaladilla rusa”.

Croquettes arose as a strategy to avoid wasting any food, particularly beef. These pieces are mixed with béchamel sauce and cooked till golden brown to make use of leftover meat or vegetable scraps. It’s an excellent approach to ensure that no food in the fridge goes to waste. Croquettes originated in France and are made with cream potatoes as a basis. For their croquettes, the French utilize potatoes, whereas the Spaniards use bechamel and fry them in olive oil. This is a thick, creamy sauce made with olive oil from Spain, flour, and milk, similar to a roux.

If you visit Spain, you will come across patatas bravas, which are one of the most popular Spanish appetizers. They’re available at practically every bar and make a fantastic dish to enjoy with friends, family, or even students.

Patatas bravas is a Spanish dish that was invented and patented in Madrid. The potatoes are sliced into irregular 2 cm pieces, cooked, then seasoned with a spicy tomato sauce that is poured over them and served immediately.

The patatas bravas sauce is produced with a tomato sauce, vinegar, and chili, such as cayenne pepper, as a base, but other ingredients are utilized that are well-kept secrets of each cook and provide a distinctive touch to the recipe.

In Catalonia and Valencia, the sauce is created with extra virgin olive oil from Spain, chili, paprika, and vinegar. The crucial factor is that it’s spicy; in fact, the word «bravas» means «spicy.» Brava implies fierce and anger in Spanish.

Fresh ripe tomatoes, garlic, good extra virgin olive oil from Spain, and a touch of salt are used to make this dish.

This tomato bread is an excellent example of how simple fresh ingredients can be transformed into something much more than the sum of its parts.

There are many more snacks that Spaniards enjoy every day, and you can get to know them all. The snacks described above are the most popular ones that you can see on every table.