The key to authentic Spanish cuisine

Spanish food is fashionable worldwide and the more we get to know its cuisine the more its diversity and quality seduces us. But what is the essential ingredient that sets it apart? After trying many dishes, tapas and different recipes, we realise that they all share a common ingredient: Extra Virgin Olive Oil from Spain, which have many different flavours and work with any culinary technique. Plus, it’s not so much about what you eat buthow you eat. This is how it’s done:

Not every Spaniard eats tapas every day but the truth is that most of them would like to. Tapas, those little dishes of cold cuts, cheeses, stews or fried food all have a virtue which goes beyond taste: they can be adapted to all manner of timescales. Not much time? A quick snack of potato omelette and then get on with the rest of the day. It’s Sunday lunchtime and you have the whole afternoon to spend with the family? Then hop from bar to bar trying out different specialities! Whether hot or cold, all tapas contain good quality virgin or Extra Virgin Olive Oil from Spain, that most essential of ingredients. 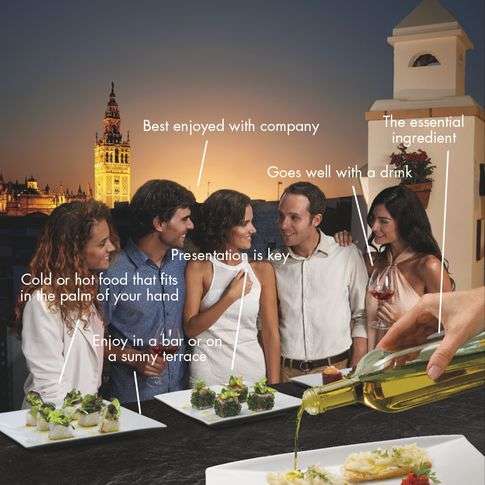 And who invented them?

Well, there are a number of theories about the origin of tapas. One of the most popular is that “tapa”, which in Spanish means “cover”, refers to the little plates they used to use in taverns to cover wine pitchers to protect them from insects.

Can you eat paella in the evening?

No! Never! Don’t worry, there’s no problem if you decide to choose paella for dinner; it’s just that you can’t then expect to pass for a Spaniard. Paella is a filling dish which requires time for preparation, resting and digestion. It’s better to eat it at lunchtime, if possible at a beachside location with the sound of the ocean breeze as a backdrop:

Was sangria invented for tourists?

No, sangria isn’t only for tourists. Although for many years it had a bad reputation due to some rather dubious versions, sangria is reclaiming ground as the original Spanish summer punch. There is no hard and fast recipe for preparing it, but it usually contains a light red wine, a liqueur or brandy and fresh fruit. An even more popular version of this drink is “tinto de verano” (red wine and lemonade), and for those who might prefer a more refreshing version, “blanco de verano”, made with white wine, lime, mint, lemonade and, most importantly, lots of ice!

What do you usually find on all Spanish dining tables?

It’s almost impossible to find a Spanish home or restaurant without bread on the table; it’s like rice in Asia or tortillas in Mexico. And along with the bread, a bottle of Olive Oils from Spain and a bottle of vinegar. In some areas, the custom is to spread the bread with fresh tomato, salt and Extra Virgin Olive Oil from Spain, while others prefer to use a slice of toasted bread as the base for their “pintxos” or snacks. But one way or another, bread and Extra Virgin Olive Oil from Spain are always to be found on Spanish dining tables. After all, one of the sayings used to describe something that is really great or tasty is “it’s good enough to dip your bread in.” Aperitif time is the perfect moment to try different types of Extra Virgin Olive Oil from Spain, either choosing two different varieties of olive or a good blend to compare their nuance.

How many courses might a meal with friends consist of?

An informal meal could include more than five or six dishes, both hot and cold, if sharing tapas. Part of the fun lies in the variety of tastes, the comparison between different preparation methods and the battle over the last croquette! For a slightly more formal meal the norm is a starter, main course and dessert… with aperitifs to start and coffee and drinks afterwards. Yes, you’ve guessed it; the Spanish absolutely LOVE to eat.

Why are there so many cold dishes?

In Spain there is a very long tradition of making sausages and other charcuterie. Spanish cured ham, for example, is world famous. If you add a generally warm climate and the fact that cold food is easier to serve as a snack, then this preference is not surprising. There is also a huge range of different canned products: meat, fish, and vegetables, all preserved in Extra Virgin Olive Oil from Spain which protects them from oxidation and infuses them with unique a texture and flavour.

Do meals last for a long time? What’s the “sobremesa” all about?

In a Spaniard’s house it’s unlikely that the meal will start when it’s supposed to, but it’s even more difficult to know exactly when it will end. The ritual of the “sobremesa”, lingering at the table in leisurely conversation with friends or, as it’s usually referred to, “putting the world to rights”, is one of the most enjoyable aspects of Spanish-style eating. Will you join us?